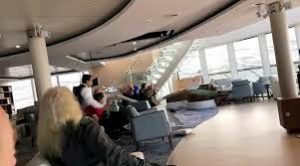 Sea journey has come a long way since the sinking of Titanic. A cruise liner had run into trouble in Norway’s stormy seas on Saturday. However, about 460 Viking Sky passengers were rescued to safety by helicopters in a spectacular Viking Sky rescue operation. The Viking Sky cruise arrived in the port of Molde at around 4:15 pm (1515 GMT) escorted by tugboats with the remaining passengers – 436 guests and 458 crew remained on board.

The cruise liner had lost power and started to drift on Saturday afternoon two kms (1.2 miles) off a stretch of Norwegian coastline which is notorious for shipwrecks. The captain sent out a Mayday prompting authorities to launch the airlift in difficult conditions rather than run the risk of leaving people on board. The furniture slid and crashed, leaving the passengers frightened. The route to Stavanger from Tromso in a notoriously treacherous stretch of waters.

Some 460 of the 1,373 people on the ship had been airlifted by five helicopters before the rescue was halted. Rescue teams including helicopters and boats were sent to evacuate the cruise ship under extremely difficult circumstances – gusts up to 38 knots (43 mph) and waves over 8 meters.

Three of the four engines which had stopped functioning, restarted on Sunday.  Two tugs towed the vessel away from dangerous reefs before it set sail for Molde, 500 kms (300 miles) northwest of Oslo, under its own power. Several passengers were seated and waited to get off the ship.

About 17 people had been taken to hospital. One person more than 90 years old and two 70-year-olds suffered serious fractures.