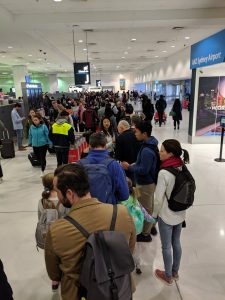 Australian Border Force IT outage led to long delays at the departure gates at Sydney airports on Monday morning. Long queues snaked through the departure gates as electronic passport control machines were reportedly down. The staff was forced to process travellers manually. Airports across the country are affected due to the IT outage.

The latest strife follows a weekend of chaos at the airport, caused due to strong winds across Sydney. Airlines that have cancelled multiple flights into and out of the airport in the city’s south include Qantas, Jetstar, Tigerair, Rex and Virgin.

Angry passengers tweeted images of long lines – not a great way to start the week. Melbourne and Brisbane were also affected.

A spokesperson for the Australian Border Force said that the ‘IT glitch’ had affected several airports around the country but was unable to confirm exactly what the issue was. All systems were back up and running by 11.30 am with the backlog cleared a short time later.

Border Force has issued an apology to all travellers affected.