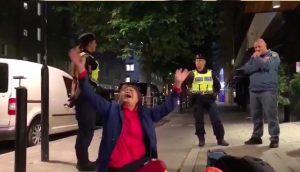 China renews warning against travelling to Sweden owing to ongoing diplomatic row. Beijing claims that the tourists have been involved in over 40 incidents in over three months. It reissues warning citing ‘security situation’.

Row over human rights and tourists’ claim that they were mistreated by police have strained relations between the two sides.

This travel alert is second such statement in three months.

Human rights are the mainstay for the dispute between them. However, the trigger was the incident in early September. A group of Chinese tourists claimed they had been mistreated by the Swedish police. It led to fierce nationalist backlash.

Foreign Ministry said there had been over 40 incidents – including thefts and robbery – involving Chinese tourists over the past three months. The latest travel advisory was published by the Chinese embassy in Stockholm.

The first travel warning was issued on September 23 and expired on December 22, but it has been renewed and extended until March 22 because of ‘the security situation in Sweden’. The Swedish government has yet to respond to a request for comment.

There was another situation where three tourists were removed from a Swedish hotel.