EMITT runs towards a record 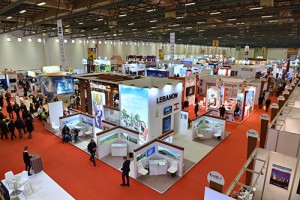 One of the five largest tourism exhibitions of the world, the East Mediterranean International Tourism & Travel Exhibition (EMITT) keeps on attracting intensive attention. The exhibition, which will take place between January 25-28,2018 at the TÜYAP Fair, Congress & Convention Centre, has already received a record number of 4,500 applications from hosted buyers in 108 countries,mainly from India, Indonesia, Philippines, Russia, the Balkan Countries, Italy, Bulgaria and Greece.

Preparing for hosting a record number of foreign professionals this year, the East Mediterranean International Tourism & Travel Exhibition (EMITT) keeps on leading the industry with useful content and collaborations that create value for all participants. Organized for the 22nd time this year, EMITT received 4,500 hosted buyer applications from 108 countries. Meticulously taking into consideration this intensive interest, the EMITT officials will approve the application of 650 hosted buyers that will be beneficial for the participants of the exhibition and the country’s tourism, and they will be included in the appointment system which is created especially for the exhibitors.

Over 50,000 visitors are expected at EMITT, which is organized in collaboration with Turkish Hoteliers Federation (TÜROFED) and Turkish Tourism Investors Association (TYD), with the contributions of KOSGEB(Small and Medium Enterprises Development Organization) and the corporate sponsorship of the Ministry of Culture and Tourism, Istanbul Metropolitan Municipality, and Turkish Airlines.

Taking place between January 25-28,2018, EMITT will serve tourism professionals during the first two days and the holiday consumers during the third and fourth days. The holiday consumers will take a look at the vacation destinations at the exhibition and have the opportunity to plan an affordable holiday route with the “early booking” campaigns.

Groundbreaking interest in EMITT with 4,500 hosted buyer applications from 108 countries.

Stating that they are preparing to host a record number of foreign professionals this year; Hacer Aydın, ITE Turkey Tourism & Travelling & Fashion Group Director, said that they have been growing steadily since their first event in 1999 and that they have turned EMITT into one of the five largest tourism exhibitions in the world.

Emphasizing that they have already attracted a lot of interest with 4,500 hosted buyer applications from 108 countries, Aydın said “Up until now, we have approved the highest numbers of hosted buyers from the countries such as India, Indonesia, Philippines, Russia, the Balkan countries, Italy, Bulgaria and Greece. We are carefully evaluating the applications from these countries and other countries with a high tourist potential. As a result, we will select 650 hosted buyers from 4,500 applications that we have received until now; however, we have been attracting so much attention that we might have to increase this number.”

Also making comments on the industry, Aydın said “After the relations with Russia were recovered, the tourism data began to show positive signs. This rise will continue in 2018 and we predict that we can achieve the figures of the year 2015 once again. After 2018, the tourism industry will regain its strength and reach its goal of ‘50 million tourists, 50 billion dollars”. Thanks to these developments in the industry,the EMITT exhibition, which has been playing an important role in improving the country’s tourism for 22 years, will keep on growing and making contributions into the country’s tourism and economy.”

What are the national and international incentives that will improve domestic tourism?

Important and valuable guests from Turkey and abroad will participate in the opening ceremony, which will take place on January 25, 2018. Many important people such as Prof. Dr. Numan Kurtulmuş, the Minister of Culture and Tourism of Turkey; Rıfat Hisarcıklıoğlu, the Chairman of the Union of Chambers and Commodity Exchanges of Turkey; Vasip Şahin, the Governor of Istanbul; Mevlüt Uysal, the Mayor of Istanbul Metropolitan Municipality; Oya Narin, the Chairwoman of Turkish Tourism Investors Association; Osman Ayık, the Chairman of Turkish Hoteliers Federation; Michael Frenzer, President of The Federal Association Of Germany’s Tourism Sector; Taleb D. Rifai, former General Secretary of United Nations World Tourism Organization (UNWTO); and Zurab Pololikashvili, the General Secretary of UNWTO will also be attending in the opening ceremony.