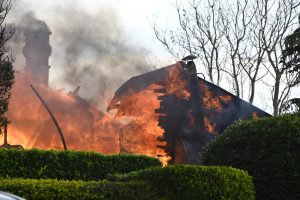 An evacuation order has been issued for the residents in North branch, a Southern Downs town, around 65 kilometres south-east of Toowoomba, fire and emergency services.

The week’s worst fire conditions are expected on Wednesday with the temperature soaring to 40 degree Celsius along with heatwave which is supposed to fuel more fire incidents and this is the reason behind the fresh evacuation order.

The residents of the affected area have been asked to evacuate west along North Branch Road to Maryvale as firefighters warn that the bushfire was burning out of control towards Young Road.

The other evacuation order has been issued for all campers on Moreton Island to seek refuge at Tangalooma Island Resort.

The number of Queensland bushfires remained steady at 72 on Tuesday afternoon, but the number of homes doused into flames has increased from 16 to at least 21.

He said that houses on the western side of a bushfire might be safe today, but they can be unsafe if the flame from bushfires upsurges towards them because of the strong winds.

As per experts, conditions are supposed to be under control on Thursday with temperatures expected around 2-6 degrees above average in the south-east. Light and cool winds are expected on the day.