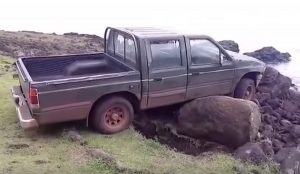 After destroying one of the Easter Island’s famed statue a Chilean man was arrested. He crashed into the statue with his truck which angered the Ma’u Henua community, who takes care of the statues or moai and consider them as  sacred.

For the 1,000 or so moau the local mayor Pedro Edmunds Paoa has called for better protection on the Chilean island and want stricter traffic regulations.

He said that everyone decided against establishing traffic rules when it came to vehicles on sacred sites but they as a council were talking about the dangers and knew that what the rise in tourist and resident numbers could mean.

They don’t listen to the authorities resulting in this type of a situation.

The pictures of the destruction was shared by the Ma’u Henua Community which on its Facebook page showed the figure reducing to rubble.

There was an emotive post stating that in the Ma’u Henua Community they regretted what happened in the morning in the PU A PAU sector, where a truck had hit one of their Ahu and seriously damaged a structure  that included a moai.

Reiterating the importance of taking care of the heritage they have in the park. They are not just archaeological vestiges but are sacred elements for a living and fundamental culture in the cosmovision.

The Rapa Nui people carved the UNESCO World Heritage-protected moai which are the monolithic figures on the Easter Island between 1250 and 1500.

‘Ahu’ are the stone platforms on which many statues are set.

The World Monuments Fund (WMF) on its 2020 watchlist  had included the Rapa Nui National Park.

WMF highlights the 25 attractions which are particularly endangered.