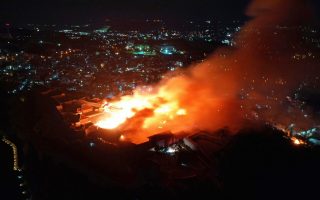 A fire engulfed the UNESCO world heritage site Shuri castle at 2.40 this morning and left its main structures destroyed.

Firefighters were found battling the flames since early morning at the site in Japan’s Okinawa Island. No casualties have been reported yet.

Constructed 500 years ago in the Ryukyu Dynasty, the castle was declared Japan’s national treasure in 1933. It has survived huge destruction during World War II.

The present structure is a reconstruction. It was reconstructed and opened to the public in 1992. The heritage property was undergoing renovation since last few years.

The castle is atop a hill overlooking Naha city, Okinawa’s capital and surrounded by stone walls. It is known for its fortified structure, colourful main buildings infused with Japanese, Chinese and Okinawa designs.

The main building apart from the north and south structure of the castle has been razed to the ground due to fire. The cause of the fire has not been ascertained yet. Locals are claiming that a security call alarm went off at around 2.40 am by which they got to know about the incident.

Twenty fire engines arrived at the spot. However, they found it quite difficult to control the flames and also couldn’t save the main structure of the building from being badly destroyed.

The castle was added in the world heritage site list in 2000 along with several other sites related to Ryukyu Dynasty.

Mayor Mikiko Shiroma said that best possible efforts would be taken to restore the glory of the world heritage site.

The castle has survived three fire incidents during the Ryukyu Dynasty and another one during World War II.

The castle happens to be the largest wooden building in Okinawa.