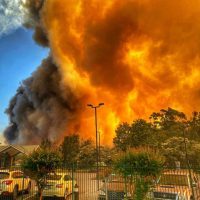 Dozens of bushfires are burning out of control in New South Wales and  Queensland as the temperature is increasing.

Bushfires are burning across the state with a record 15 emergency warnings issued for brazes from the Blue Mountains to the Queensland Border.

Over 90 fires were burning on Friday afternoon in New South Wales and conditions are expected to be worsened with the passing of time.

New Rural Fire Service Commissioner Shane Fitzsimmons said that fires in the north coast and northern New South Wales areas are becoming more tense and dangerous. He said that some are also affecting the weather conditions.

15 emergency warnings have been issued in New South Wales from fires stretching from just north of Foster to the west of Tenterfield near the Queensland border.

Altogether, 89 bushfires are burning across the state. Nine watch and act alerts have been issued so far.

The fire got out of control near Hillsville, south of Taree and crossed the Pacific Highway as it spread quickly. The highway has been closed on both sides between Taree and Bulahdelah. The Pacific Highway has also been closed at Port Macquarie between the Oxley Highway and Hastings River Drive. The Hillsville fire is moving towards the coast at a fairly rapid speed.

The area has not been burned in the last 30 years but now it is having a huge amount of fuel load. Many schools have been closed due to bushfires.