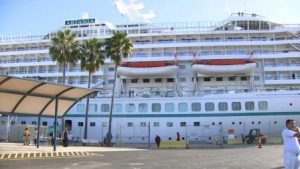 Captain Robert Fronenbroek said that it is 116 days basically North and South America, a world cruise as they call it.

Just after sunrise, the more tourists were greeted by dolphins alongside the Artania as they headed for the port. The ship docked around 9 a.m. and is expected to depart this evening.

From the beaches to the brand new hangout at Sparkman Wharf, passengers were treated to a taste of the Bay Area. Several took in a history lesson in Ybor City.

She has made more than one trek around the globe.

“I think it’s not good to stay home and be prejudiced about the world. It’s good to see it,” she said.  “They are different but in some ways, they’re all people who have the right to live.”

Meanwhile, local officials were more than happy to see folks like her taking it all in.

“It absolutely increases tourism,” said Greg Lovelace, director of cargo & cruise marketing for Port Tampa Bay. “It is great for the city because we have over 1,000 international guests exposed to Tampa Bay.”

There are 868 passengers and 518 crew members. Most are of German descent, while others are from Switzerland, Austria, Luxembourg, United Kingdom, Netherlands, Hungary, Slovenia, Croatia, and Italy.

The Artania leaves Tampa at 8 p.m. Friday night.  The next stop is New Orleans, Louisiana.