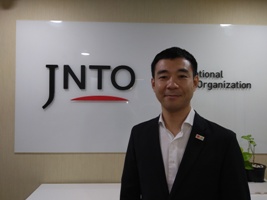 Japan National Tourism Organization (JNTO) announced Yusuke Yamamoto as the new Executive Director of Tourism for the India market effective July 1, 2019. As the Executive Director, he will be responsible in overseeing the India market while managing the development of policies and strategies to strengthen Japan’s reputation as a world-class tourism and travel destination.

Hailing from a political science background, Yusuke Yamamoto started his career by working for the Kanagawa Prefectural Government. He was also the director of South Asia market for Japan External Trade Organization (JETRO), for which he was stationed in Singapore for almost three years. After being involved in various other government sectors, he joined JNTO in 2017 as a deputy manager in the corporate planning department.

Commenting on his appointment, Yusuke Yamamoto said that he is extremely delighted and thrilled to take up this new profile which is phenomenally huge and has great potential. He is looking forward to further enhance and work closely with our partners in India. India is now one of the fastest growing outbound tourism markets in the world. This is the magnitude of travelers we are aiming to tap on. Therefore, this market has exceptional opportunities and he is glad to be fostering JNTO’s growth by being the torchbearer.

Coming with an experience of almost 22 years, his expertise in strategic business planning and tourism marketing will not only add value, but make JNTO’s hold all the more stronger in the Indian market. He will be instrumental in integrating JNTO’s focus for the Indian market by creating great relationship with the travel and trade fraternity. Being at the helm, Yusuke Yamamoto will facilitate in maximizing all opportunities aiming towards increasing the number of outbound travelers from India to Japan.

Kenichi Takano, who was earlier the Executive Director of JNTO India, would be joining back the headquarters in Japan as his tenure of 2 years and 8 months being posted in India ended in July.