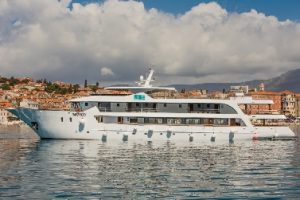 Small ship cruise company Katarina Line has announced last-minute specials of 30% off per person on select cruises in October 2019 on some of the company’s most popular routes on the Adriatic Sea. Eligible cruises include the MV Infinity’s October 12, 2019 “One Way Wonders” from Split to Dubrovnik and the October 19, 2019 “One Way Wonders” from Dubrovnik to Split. The company is also offering 30% off per person on the MV Avangard’s October 16, 2019 “Dalmatian Paradise”, a round-trip cruise out of Split. The 30% off represents a saving of up to $581 per person, based on double occupancy. Prices are based on the current exchange rates and subject to change.

“The Euro is a great value right now, so the 30% off is an even better saving for international travelers,” noted Daniel Hauptfeld, managing director of Katarina Line. “It’s a great time to discover why the clear blue waters, the stunning sunsets, and the glimmering beauty of the many islands scattered along the Adriatic Sea have been attracting visitors for thousands of years.”

One-Way Wonders
The MV Infinity is one of Katarina Line’s most popular members of the fleet, with fully air-conditioned en-suite cabins offering all the modern amenities. It was the first vessel on the Adriatic to offer balcony cabins. Katarina Line’s 7-night “One Way Wonders” follows the Croatian coastline, sailing from Split to Dubrovnik on October 12, 2019 and Dubrovnik to Split on October 19, 2019. En route, the vessel makes stops at the islands of Brač, Hvar, and Biševo, among others. Itinerary highlights include a visit to the Blue Cave, whose natural, silvery-blue color is created by sunlight refracting through cracks in the stone. There is also a visit to Korčula Island, best known as the birthplace of Marco Polo. Guests will also visit the famous salt lakes in Mljet National Park, as well as the fortified village of Ston on the mainland to explore its medieval ramparts and enjoy a tasting at a nearby oyster farm.

Dalmatian Paradise
The 7-night round-trip “Dalmatian Paradise”, departing October 16, 2019, sails out of Split on the fully-modern MV Avangard and visits the islands of Korčula, Mljet, Hvar, and Brač. Highlights include participation in an authentic Croatian village party on the Pelješac peninsula, an evening dinner cruise along the old town city walls of Dubrovnik, a wine tasting excursion, and a Captain’s dinner with live entertainment in the town of Bol. Other highlights include a visit to Mljet National Park and swimming at Golden Horn beach on the island of Brač.

All prices include daily buffet breakfasts and most lunches, as well as some dinners. They also include all admission fees and ground transportation per itinerary, as well as all visitor taxes and port fees. Itinerary is subject to change and all prices are based on current exchange rates for the Euro.