Too late to contain the fire in Tallaganda National Park 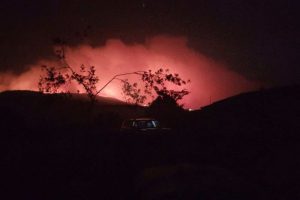 The North Black Range fire, burning in dense bush in New South Wales’s Tallaganda National Park, has reached an emergency-level, with people being asked to immediately evacuate the area as it is too late to control the fire now.

Around 4,000 hectares have been damaged by fires in the Tallaganda forest near Braidwood.

Residents of Bombay, Little Bombay, and Farringdon Road to the north of Mount Creek areas have been communicated that it is now too late to leave their respective places.

Authorities have declared a total fire ban for the Canberra region and have also declared that the fire danger is at a severe level.

That Embers are blowing well ahead of the main fire and it could reach as far as Braidwood has been told by the Rural Fire Service headquarters in Sydney.

Meanwhile, the Kings Highway has been closed between Mayfield Road and Northangera Road in both directions and a total fire ban has been issued for the ACT and surrounding NSW today, with the fire danger level upgraded to severe.

The Rural Fire Service headquarters though say that the areas, which fall in the danger zone, are quite isolated as they have only around 20 to 30 properties.

Rural Fire Service district officer Darren Marks has told that even trying to contain the fire would be dangerous and thus no effort would be taken to extinguish the fire.

As of now, there is a number of spot fires in the area west of Braidwood.

Farmers in the danger zone have said that they have prepared their evacuation plan. How they will move their livestock if wind changes, they have planned.