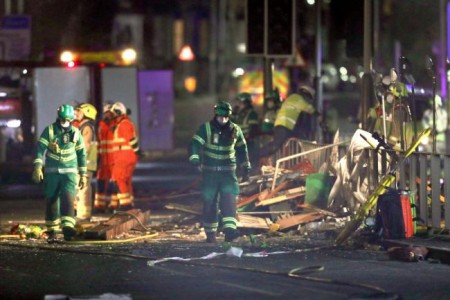 Leicestershire police mentioned on Monday that four people had died in an explosion at a property in Leicester on Sunday night.

And the major explosion that has destroyed a shop here has compelled six others to be rushed to hospital immediately. Police declared a ‘major incident’ following reports of a blast that occurred in Hinckley Road just after 19.00 GMT on Sunday.

A police spokesman said that that at this point of time, there is yet to be any indication about it being an activity related to terrorism.

Two of the six admitted to hospital are in a critical condition and the others are ‘walking wounded’ according to the University Hospitals of Leicester NHS Trust. Carlisle Street and a portion of Hinckley Road have been shut down and people are being requested to avoid this area owing to the incident and its after-effects. In addition, electricity has also been cut off for several properties.

Emergency services continue at the scene and Leicester Police said that ‘the search and rescue operation’ would continue throughout Monday.

The explosion has not only destroyed a convenience store but also a home in the central English city of Leicester on Sunday. The photos and videos posted on various social media platforms portray flames darting into the sky from the site that was reduced to rubble.

Cause of the explosion and fire is yet to be determined.

Emergency services are present at the scene searching the collapsed property and have started conducting enquiries in the area as per the statement.