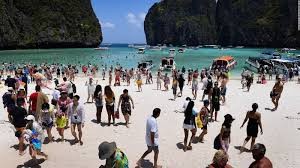 Thailand tourism officials have announced that they will close the famous Maya Bay for an indefinite period of time, after closing the beach to tourists this past June. Maya Bay was the setting of the 2001 Leonardo DiCaprio film ‘The Beach’.

The popularity of the movie and the following popularity of the beach brought in tourists in large numbers in Maya Bay, leading Thailand’s Department of National Parks, Wildlife and Plant Conservation to keep the park open year round. Most parks in Thailand close for about four months per year.

However, a decade and a half later, this heavy tourist traffic took its toll. An average of 4,000 people and 2,000 boats visited the beach per day, incurring heavy damage to the ecosystem and the area’s coral reefs and marine life.

As a result, the government closed the beach in June with plans to reopen it in September.

However, the beach has not recovered and will remain closed indefinitely. This is similar to Boracay in the Philippines. Infrastructure on the island of Boracay succumbed to excessive beach tourism—1.7 million visitors per year—and the entire island had to be shut down by the government, which called the area a “cesspool.”