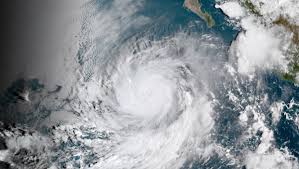 On Sunday Hurricane Rosa weakened into a tropical storm as it moved towards northwest Mexico parts of Southwest. It has been predicted there will be heavy rainfall in Las Vegas, Phoenix and Salt Lake City.

There are storm warnings for Baja California coast and flash –flood watches for parts of American states.
As per the National Hurricane Center  Rosa should hit the Baja California Peninsula and Sonora state late Monday as a tropical storm with flooding rains.

It will further move northwestwards and bring 2 to 4 inches of rain to the and the Mogollon Rim of Arizona and 1 to 2 inches to the rest of the desert Southwest, Central Rockies and Great Basin.

Till Sunday evening Rosa had a maximum sustained winds of 70 mph and was centered about 235 miles southwest of Punta Eugenia in Mexico.

At a speed of 12mph it is heading north-northeast