Before peak season, locals in Brazil have started cleaning up beaches 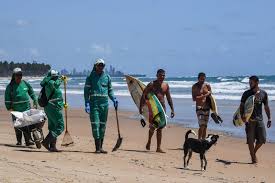 Paiva, Itapuama and Enseada dos Corais in the northeastern state of Pernambuco are among hundreds of coastlines contaminated by an oil spill that began to appear in early September and has affected more than 2,000km of Atlantic coastline.

As the currents in ocean brought huge globs of crude oil to the coast near the capital Recife in recent weeks, locals hurried to the quaint beaches in other times and used their bare hands to remove the toxic material coating sand, rocks and wildlife.

“I was shocked, there were people entering the water without gloves, without safety equipment, in the middle of the oil,” coconut seller Glaucia Dias de Lima, 35, said as she picked up chunks of crude from Itapuama beach.

Huge number of military personnel has been dispatched to speed up the cleaning process of the oil that has killed huge number marine animals, including turtles, and reached a humpback whale sanctuary off Bahia state that has some of the richest biodiversity of the country.

This was the third major environmental tragedies to strike Brazil in 2019. In recent months, fires devastated the rainforest of Amazon and in January a mine dam collapsed in the southeast, spewing millions of tonnes of toxic waste across the countryside.