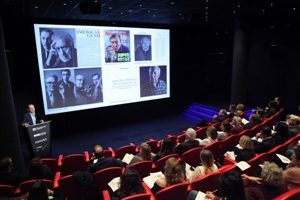 The Philadelphia Convention and Visitors Bureau (PHLCVB) and NYC & Company unveiled highlights of their arts and culture scenes for 2020, including the announcement of an unprecedented retrospective from the American abstract expressionism artist Jasper Johns at the Philadelphia Museum of Art and the Whitney Museum of American Art, during an exclusive preview event at London’s Soho Hotel on Monday 2nd March 2020.

The press conference, which was hosted by  the PHLCVB, NYC & Company, and the two prestigious East Coast Museums, The Philadelphia Museum of Art and the Whitney Museum of American Art in New York City, saw both museums announce the monumental retrospective, which will be simultaneously staged at both cultural institutions from 28th October 2020 until 21st February 2021.

The two-venue exhibition from Jasper Johns, an American painter, sculptor and printmaker well-known for his various depictions of the American flag and other US-related topics will feature a large body of work with many objects shown publicly for the first time. The two exhibitions – one in Philadelphia and one in New York City – are designed to be reflections of one another and can be viewed individually or together for an immersive and innovative exploration of Johns’ work. A visit to one museum or the other will provide a vivid chronological survey; a visit to both will offer an innovative and immersive exploration of the many phases, facets and masterworks of Johns’ still-evolving career.

The media event also saw both destinations highlight their iconic arts and cultural scenes for 2020, including the Philadelphia Museum of Art’s current £152 million ($196 million) transformation, which has been led by architect Frank Gehry and is set to be completed in full by autumn 2020. The major renovation will add 23,000 square feet of new gallery space and an additional 67,000 square feet of public space.

The World Heritage City of Philadelphia boasts a number of premier cultural institutions, including the Barnes Foundation, which houses one of the largest private collections of impressionist and post-impressionist paintings in the world. The East Coast metropolis is also home to the Pennsylvania Academy of the Fine Arts, which was America’s first art school and art museum, and is credited with training artists like Thomas Eakins, Mary Cassatt, and Henry O. Tanner.

Speaking about the significance of the Jasper Johns exhibit, Julie Coker, President and CEO of the Philadelphia Convention & Visitors Bureau (PHLCVB), said: “We are thrilled to work in partnership with NYC and Company, the Philadelphia Museum of Art and the Whitney Museum of American Art to help celebrate the ground-breaking Jasper Johns retrospective that will be staged simultaneously at both museums. From October 2020 until February 2021, the retrospective will feature a stunning array of the American artist’s most celebrated paintings, sculptures, drawings, and prints as well as many lesser-known and recent works. Each is a self-contained exhibition, and visitors are encouraged to visit both museums to experience the entire collection.

“In Philadelphia, art surrounds every aspect of the visitor experience – it starts as soon as you deplane at PHL International Airport with their award-winning visual arts initiative, and once downtown, it follows you down the street as you pass over 4,000 pieces of outdoor art – the largest in the U.S.”