Plane with medical aid burst into flames at Manila Airport 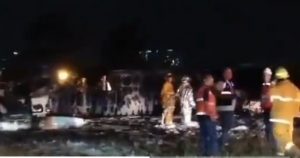 On Sunday night, an aircraft loaded with medical supplies and carrying eight people, including an American and a Canadian, caught fire upon take-off and burst into flames at Manila Airport, leaving behind no survivors. The plane headed towards Tokyo, was used as a medical evacuation aircraft.

The eight deceased passengers included three flight crew, flight medic, a doctor, a nurse, one patient, and a companion. The Civil Aviation Authority of the Philippines informed that the Agusta WW24 aircraft had an unspecified technical problem upon take off.

Ed Monreal, General Manager, Manila Airport said in a recent press statement that the plane caught flames near the main runway. He informed that firetrucks and rescue personnel rushed towards the aircraft and doused it with foam in an attempt to extinguish the flames. However, there were no survivors and all eight passengers on board were killed. No victim would be identified until their families are informed about the tragic incident.

According to video footage, the aircraft was engulfed in bright-orange flames. As the sirens went out, firefighters assembled to put out the fire by spraying chemical foam. The bodies of the victims were still inside the exploded aircraft, nearly 3 hours after the incident. Airport authorities awaited police arrivals to examine the crash site before retrieving the remains.

Manila Airport closed its main runway due to the accident. As a result, a Korean Airlines flight bound for Manila was sent back to Clark International Airport. The main runway is expected to open as soon as the wreckage is removed.

Donaldo Mendoza, Deputy Chief, Civil Aviation Authority of the Philippines, said the aircraft held good records and had properly trained and certified pilots. He informed that the aircraft also delivered medical supplies in the central Iloilo province, just a day before the incident.