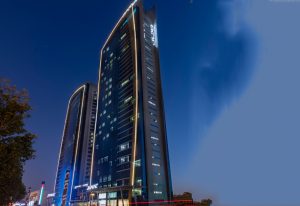 Rotana, one of the leading hotel management groups in the Middle East with additional hotels in Eastern Europe, Turkey and Africa, recently announced to launch a new property, the DAMAC Towers Arjaan by Rotana in Riyadh. On Sunday, the company took over the management of the property and announced its launch by early April this year. The announcement comes after Rotana Group and DAMAC Hotels and Resorts signed a partnership last year.

The property offers accommodation of 448 rooms, suites and penthouse. Each room is built luxuriously and features state-of-the-art facilities. The hotel also comes with well-built meeting and events spaces ideal for organizing both business and private events. It also has an equipped gym, a wellness and fitness centre and separate temperature-regulated swimming pools for men and women.

Guy Hutchinson, Chief Executive Officer and President, Rotana Hotels said in a press brief that the launch of the new property is exciting and will mark the debut of Rotana brand’s Arjaan Hotel Apartments in Saudi. He said that the property will contribute to further enhancing the company’s diverse portfolio in the region and also bring elegant city living in the heart of Riyadh. He also mentioned that irrespective of the present global crisis and situation, the brand is positive and optimistic about the tourism performance of the place and the whole region. He added that governments in numerous countries across the globe are focusing on economic diversification and as tourism plays a key role in those efforts, the company is looking forward to a bright future of the hospitality industry.

Located on King Fahd Road, the brand new hotel will be the 7th addition to Rotana’s property in the Kingdom. In addition, the Rotana group has a pipeline of two properties in KSA including Centro Corniche, Al Khobar and Dana Rayhaan. The new properties are scheduled to open in the first half of this year.