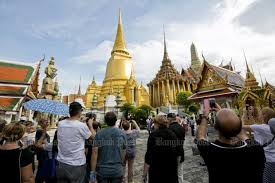 Thailand has reopened the cave where 12 young soccer players and their coach were trapped last year in a saga that captivated the world.

The Tham Luang cave had been closed to visitors since the Wild Boars team was rescued alive after nearly three weeks inside the grotto’s waterlogged corridors.

The world-famous cave in northern Chiang Rai province was reopened Friday, drawing some 2,000 tourists in a single day, a local conservation official said.

“We have allowed visitors to see the mouth of the cave,” said Kamolchai Kotcha, director of the local conservation office that overseas the cave.

Thai cave where boys were rescued reopens for tourism

Guests are not allowed beyond the entrance for now, where they can peer into the cave opening, but officials said they were considering allowing people deeper inside after surveying the safety of the route.

Some of the rescue equipment left behind — including telephone wires, hoses and zip lines — could be exhibited inside the cave for visitors to view in the future, Kotcha said.

Photos from the opening on Friday showed tourists at the site’s entry, where last year the boys’ bikes and backpacks were found — alerting local police they were likely inside.

The Wild Boars went into Tham Luang in June 2018 for a routine hike after a soccer practice but became trapped after heavy rains blocked the only route out.

Hundreds of people descended on the remote site to help save the boys, who were found — emaciated but alive — on a muddy perch deep inside the cave after nine excruciating days of searching.

The boys were sedated and fitted out in full-face breathing masks before being pulled to safety through a hazardous underwater labyrinth.