Tourists break out at Kyiv airport to avoid quarantine 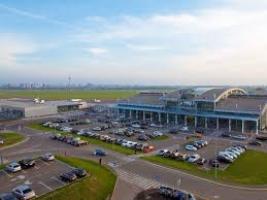 In order to escape the coronavirus quarantine hundreds of Ukrainian citizens returning home from Vietnam broke out of Kyiv airport.

The Ukraine’s government had organised a rescue flight for tourists to get them back home and were captured on video bursting through the airport doors with their suitcases, personnel dressed in hazmat suits attempted without success to stem the flow.

The 238 people repatriated from Ho Chi Minh City were advised by the Ukrainian authorities to be put in quarantine at airport hotels for two weeks upon their return.

For the next 14 days buses were waiting to take them to their temporary accommodation and ha the choice of basic facilities.

But instead most passengers seemed to flout the advisory and made their way home instead.

The UK government had announced that it would organise £75m airlift to repatriate UK citizens.

Large groups of British travellers remain in South Africa, Australasi, India and other Asian countries as the coronavirus lockdowns extend across the world.

Foreign secretary, Dominic Raab stated that an unprecedented number of British travellers are trying to get home.

But the government has warned British travellers stranded abroad that the operation “will not be quick or easy”.