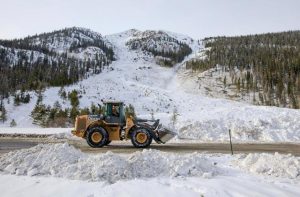 A travel warning due to the extreme likelihood of major avalanches occurring in certain parts of Colorado has been issued by The National Weather Service. The official warning states that dangers range from high to extreme, with the chance of ‘avalanches of historic size.’ As per the Colorado travel warning, these avalanches will be very destructive if they occur.

Some extremely dangerous avalanches are already occurring around Colorado. One of them has severed a gas line that has caused the shutdown of I-70.

Colorado avalanche  travel warning is in effect until Friday morning at 8:00 AM MT. Travel in avalanche-prone terrain is to be avoided. Given the sheer amount of snow that will be involved, avalanches might run much further than expected.

Colorado avalanche warning also mentions the reasons of the increased risk being intense snowfall and high winds. Many places are reporting more than a foot in the last 24 hours, including Arapahoe Basin Ski Area, which had to shut down due to avalanche risks.

Avalanche-related concerns shut down a resort, and several highways.