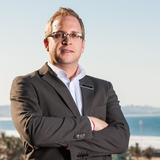 Tsogo Sun has a reputation for innovation and excellence in hospitality, and I’m delighted to have the opportunity to continue to be part of this exciting group. I’m looking forward to getting to know our regular guests, welcoming new guests, and building on the success created by the fantastic team here.

With a career spanning more than 20 years, Smith began his journey at Drakensberg Sun Resort, where he was employed as a switchboard operator.

Over the years, he developed a passion for the hospitality sector, which quickly saw him secure management roles at Southern Sun Cullinan, uMhlanga Sands Resort, Garden Court Blackrock and Garden Court South Beach. Recently, he worked as the hotel general manager at Holiday Inn Sandton.

Smith says he is ready for the challenge. he also said that it is a great honour to be entrusted with taking this magnificent hotel to new heights. He is looking forward to working with the team.

Samantha Croft, the director of operations, KZN hotels, said she was confident he would take the hotel to a new level.