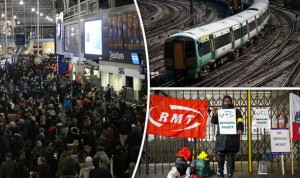 Two 24-hour strike was announced by National Union of Rail , Maritime and Transport Workers (RMT) on successive Saturdays, 16 and 23 due to the bitter dispute over the role of guards between the RMT and the train operator Greater Anglia.

The dispute is over the extension of Driver-Only Operation (DOO) and regarding the staff of trains and the union’s general secretary, Mick Cash, blamed the train firm’s “intransigence”.

Even though there were strenuous efforts by the RMT rep could not reach a negotiated settlement to the dispute stated Mick Cash. The vital safety role of the guard was still under threat. The fundamental issue was not resolved even though the company had put forward recent talks.

As per the train operators DOO will turn the operations more efficient and reduce the delays.  The on-board staff will be able to focus on customer service and revenue protection that would tackle the fare dodging.

It was reported that the RMT was in dispute with several other train opaertors. The changes in the current system will be of disadvantage to the passengers and will reduce mobility.

Cash further stated that he saw in the past two weeks what is the consequence when the guards were taken off their trains. There were scandals on denial of disabled passengers and access on Southern Rail.

There will be a competition and the rail workers are protesting against the government plans for the modernization of SNFC, the state operator.

The next 48-hour strike at midnight will start at midnight by the Rail unions and  train services to, from and within France will see walk-outs every five days through June.

So far, Eurostar has cancelled four trains between London and Paris on Saturday and five on Sunday.