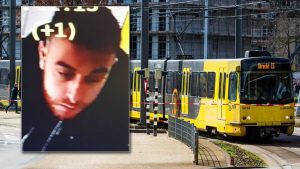 At about 10:45 local time (09:45 GMT), shooting on board of one the city’s trams at the 24 Oktoberplein junction was reported to the police yesterday. As of now, 3 are dead and 5 wounded in the Utrecht shooting. Several hours after the attack, the suspect Gokmen Tanis, a 37-year-old Turkish man, was found in a building about two miles (3km) from the scene.

Yesterday a witness said that a man started shooting wildly. Some witness heard people yell ‘Shooting, shooting’.  The shooting was done by a gunman who then fled the scene, leading to the manhunt which lasted for much of Monday.  Several of the injured are in a critical condition.

Schools were closed and security was increased at airports and mosques while counter-terrorism police worked to locate the suspect. A number of raids were carried out.

The threat level earlier was raised to its highest point and paramilitary police were posted at the airports and mosques. The threat level in Utrecht has been reduced following the arrest.

Utrecht University closed all its buildings and trains were not allowed to run into the city’s central station. However, some public transport services have now reopened. Crime levels are low and gun killings are rare, which is the case for much of the country.

The Government of Canada has issued a travel advisory for the Netherlands.