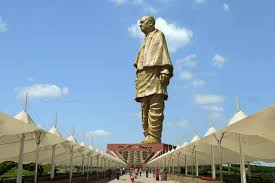 According to Prime Minister Narendra Modi  the “statue of unity” would serve as a major tourist attraction.  The statue was unveiled in a grand inaugural event and the Prime Minister called it a symbol of India’s integrity and resolve.

However, the locals mentioned that it was a wastage of public money and that the funds can be used in a better way.

Flowers on the statue were showered by the Air Force which was designed by decorated Indian sculptor Ram V Sutar.

Thousands of policemen have been deployed across the district, there were instances of violence and protests over the effigy. Farmers and tribal activist were detained by the police who protested on Tuesday.

Local farmers are demanding compensation for the land as it has been acquired by the government for various projects that will include the construction of memorial.

So far the Gujarat government has paid more than half of the funds for the statue while the rest was brought in by the federal government or public donations.

The statue was commissioned by Modi who as the state’s chief minister in 2010 and is his pet project.

The memorial has surpassed the height of the Spring temple Buddha in China which is 128m  and was deemed as the tallest in the world. It is almost twice as tall as the New York’s Statue of Liberty.

The western state of Maharashtra will be constructing a memorial to Shivaji which is expected to be 190m tall.

Patel known as the ‘Iron Man of India’ was India’s first interior minister and deputy prime minister. He is known for persuading feuding states to unite and become part of the Indian state after independence.

The site located 200 km (125 mile) from Gujarat’s main city will be attracting 2.5 million annual visitors and boost the local economy.

The statue weighs 67,000 tonnes and is built to withstand major earthquakes and heavy winds, there were around 12,000 bronze panels in the exterior weighing almost 1.850 tonnes.

There is a 12 km artificial lake and the monument covers more than 20,000 sq meters.