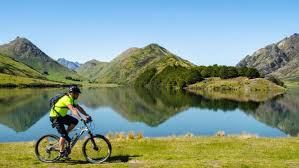 A new tourism proposal for the Mataura River could bring in trouble.

In Europe, where tourism has been a profitable enterprise for long, statistical increase in numbers is now inviting backlash. Limits have been imposed at many popular destinations, from Amsterdam to Venice to Prague to Barcelona.

In New Zealand, however, so far, limits have not been imposed; however, the obvious impacts of mass tourism on the country’s towns, roads, and natural environment can be witnessed.

Officially, it seems, there is little to be seriously concerned about. NZ is still “clean and green” – a South Seas paradise of idyllic beaches, lakes, rivers, and evergreen forests – all of them pristine and capable of absorbing multitudes of visitors. But this happy picture is no longer very convincing.

The Mataura is a world-famous trout-stream, symbolized by the big plastic structure beside the bridge in Gore. Ever since trout were introduced to New Zealand, this river has been an irresistible attraction for anglers throughout Otago and Southland.

The river’s combination of attributes – ideal size, secluded water, easy access, and sublime hatches of mayflies have made angling by far the most popular recreational activity on the river.

Water quality is declining gradually, and with increasing tourist boom is an increase in the number of overseas anglers, putting extra pressure on the fishery and showing once again the classic vulnerability of a commons.