6 dead, at least 92 injured as a result of Oklahoma’s tryst with EF3 tornado 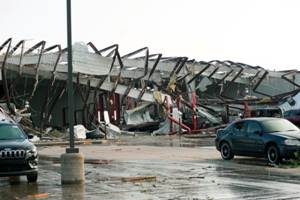 A powerful, EF3 tornado left 6 dead, destroyed a motel and a mobile home park and injured at least 92 in the Oklahoma City suburb of El Reno overnight as severe weather enveloped the U.S.’ middle section on Sunday.

A search and rescue effort was underway in areas reduced to rubble as per El Reno Mayor Matt White.  The National Weather Service rated the tornado as an EF3 on the Enhanced Fujita Scale, about 75 yards wide at its widest point and on the ground for 2.2 miles. An EF3 tornado can drive winds of up to 165 mph.

The Midwest has been battered by scores of tornadoes and heavy storms in recent days, leaving at least nine dead and a trail of damage from high winds and flooding. The weather pattern isn’t expected to change soon in the early this week. More rounds of severe weather to the Plains is expected as per AccuWeather.

The tornado was rated EF-3 on the Enhanced Fujita scale, said the National Weather Service in Norman, Oklahoma on Twitter after completing its survey of the damage in El Reno. The twister lasted only 4 minutes. An EF-3 rating indicates maximum wind speeds of 160 mph.