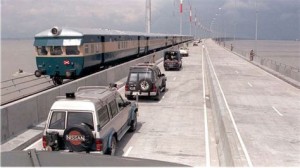 The Asian Development Bank has approved loans totaling about 360 million U.S. dollars to buy modern rolling stock and support reform in Bangladesh Railway in order to revolutionize the transportation system of Bangladesh, which helps in gaining the tourism interests.

The Railways Networking system in Bangladesh has potentially offer a cheaper, safer, and more fuel-efficient means of transport of goods and passengers than roads, but have been held back by lack of investment and aging and unreliable rolling stock.

However, the market share has dropped because of inadequate investment in railway infrastructure and rolling stock over an extended period.

Under its Seventh Five-Year Plan for fiscal years 2016-2020, Bangladesh government has placed special emphasis on railway development, setting targets to increase the market share to 15 percent in freight transport and 10 percent in passenger movements by 2020. This involvement will also sparks in travel and tourism industry.

Bangladesh Railway has also been operating at a loss, its operating costs about double what it makes from revenue. Starting with a Railway Sector Improvement Program in 2006, Asian Development Bank has provided four loans to the Government of Bangladesh for railway development totaling 2.81 billion U.S. dollars.