Home » Boeing 777 makes emergency landing with 488 people on board

Boeing 777 makes emergency landing with 488 people on board 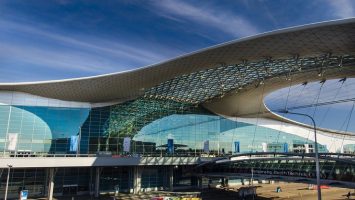 A Boeing 777 plane made an emergency landing with 488 people onboard at Sheremetyevo Airport of Moscow. As per the pilots, oil leak was found in one of the aircraft’s engines.

As per Russian emergency services, the oil pressure sensor in one of the engines went off shortly after takeoff.

A Boeing 737 aircraft from Frankfurt also made an emergency landing at Moscow on Monday after a hydraulic system sensor showed an error in the system.

Emergency landings have not always been smooth at the Moscow Airport.

Earlier in May, the Russian Sukhoi Superjet with 78 people on board bounced along tarmac before bursting into flames.

41 passengers had died in the incident while few got injured. A video from the airport clearly showed the plane bouncing along the tarmac before suddenly bursting into flames. The tail section of the plane had been engulfed by fire and was discharging thick and black smog while crew members evacuated passengers using emergency slides.

Some passengers were found fleeing across the tarmac in tears while some were found carrying their luggage.

However, no official cause was mentioned for the disaster. The investigation committee had then said that they would probe whether the pilots had breached the air safety rules or not.

The plane was on its way to Murmansk, a Russian city in the Arctic Circle, when the pilots reported an emergency on the plane.

The carrier managing the flight, Aeroflot, had said that the reason behind the incident might have been an engine fire.

The plane struck the runway several times while attempting to land, damaging the fuel tanks and causing the fire in the rear section of the fuselage.

The firefighters took more than an hour to reach passengers in the tail section.

The Flightradar24 tracking service had showed that the plane had circled twice over Moscow before attempting for emergency landing after just 30 minutes in the air.