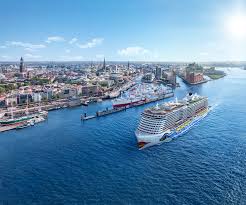 Cruise Baltic is proud to announce Nyborg in Denmark as the latest partner to join the network, bringing the total cruise destinations to 30. With Nyborg’s central location on Denmark’s main international waterway, the port offers an easy-to-reach destination for cruises in and out of the exciting Baltic:

“With the rapidly increasing number of cruise lines entering Danish waters for the Baltic, there is an equally increasing need for more available ports, in particular for slightly smaller cruise lines,” says Cruise Manager Line Tange of Associated Danish Ports.

Positioned on the eastern coastline of the central Danish island of Funen, Nyborg’s history as the legislative, royal and judicial centre of the Danish realm, dates back to the 12th century.

In more modern times, its position on the Great Belt has been instrumental in maintaining Nyborg as an international deep-water port close to the deep-water route that connects the North Sea and the Baltic.

“Nyborg is ideally placed a mere 9 nautical miles from the deep-water route through the Great Belt. While it has not previously been a cruise destination, the local authorities and population look forward to welcoming cruises,” says Line Tange, adding that 2 cruise calls are already announced in 2020.

For passengers arriving in Nyborg, there is much to experience.  Apart from its stunning beauty, the town boasts some of Denmark’s earliest national monuments. Nyborg also provides easy and quick access to the Funen capital Odense, the birthplace of Denmark’s most famous author Hans Christian Andersen.

“Nyborg and its surrounding area has so much to offer for cruise lines and their guests, and Cruise Baltic is thrilled to welcome them to the network. As with all of our other 29 destinations – be they in Denmark, Sweden, Norway, Finland, Estonia, Lithuania, Germany or Poland, we have in Nyborg an exciting and service-oriented port that complements the other Baltic destinations well,” says Director of Cruise Baltic and CruiseCopenhagen, Claus Bødker.

The Port of Nyborg also becomes part of the B2B cruise network Cruise Copenhagen consisting of more than 60 local partners of the Danish cruise industry.