Durga Puja 2018: Things to do for an unforgettable experience 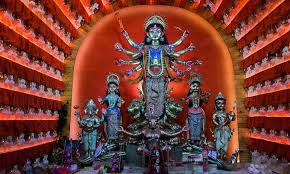 If you are planning a family trip to Kolkata, now is the time. Every year, during Durga Puja, the streets of Kolkata are buzzing with laughter, festooned with dazzling light displays and elaborate decorative pandals with exquisite idols of Goddess Durga, her children — goddesses Lakshmi, Saraswati, and gods Kartikeya, Ganesha — and Mahishasura, a demon king in Hindu mythology.

Now Durga Puja is not just about religion. It becomes a part of Bengal’s cultural heritage. If you are a culture aficionado, Durga puja will draw you most.

The word “fiesta” takes over Kolkata quite literally during Durga Puja. Once the rituals, such as, preparing or serving bhog or chaperoning the purohit are taken care of, Kolkata explodes to life. While pandal-hopping, para celebrations, adda (quintessential gossip sessions) and khawadawa (food) are the key highlights. The city enhances itself to a traditional decoration and becomes absolutely beautiful during this time. It is converted into a massive carnival ground replete with dazzling sights and sounds.

We term Kolkata as “City of Joy”. It is laos known as “City of Palaces”. Kolkata’s public Durga Puja pandals get all the attention. But the traditional ‘Bonedi Bari’ pujas in the city’s palatial old private mansions are also worth experiencing. These palaces belong to affluent aristocratic zamindar (landlord) families who have been carrying on the festivities for centuries. They are spread out across Kolkata (especially in North and Central Kolkata ). Two of them are Sovabazar Raj Bari and Rani Rashmoni Bari in north Kolkata.

Go to the Ghats to attend ritual

If you want to see the rituals, go to the ghats at Maha Shaptami morning. Durga Puja commences with the invocation of the presence of goddess Durga into the idols. These traditional ritual begins early in the morning, before dawn, with the bathing of a banana tree in the Hooghly River. The banana tree is dressed like a newlywed bride (known as ‘Kola Bou’, the banana bride) in a saree, and used to transport the goddess’s energy. The best places to attend the ritual are Prinsep Ghat, Bagh Bazaar Ghat and Ahiritola  Ghat.

The Kumari Puja is another important ritual. It is performed during the Durga Puja festival. During the festival, Goddess Durga is worshiped in various forms. In this ritual, she is worshipped the form of an innocent young unmarried virgin girl. This serves as reminder that the goddess and her energy are omnipresent in all beings. Belur Math is a prime spot to attend “Kumari Puja”.

On the last day of Durga Puja, known as Dashami, the festivities commence with married women placing vermillion on the idols of Goddess Durga. They then spread it on each other. In the evening, the idols are immersed in the water. One of the most popular immersion points is Babu Ghat (centrally located near Eden Garden). You can also go to Taki to see the “Durja Puja Bisarjan”. The specialty is to see the idol immersion of both India and Bangladesh. An excellent way of seeing it is by boat ride. West Bengal Tourism Development Corporation operates special immersion boat cruises in Kolkata. For the last few years, the Red Road Carnival in Kolkata, a new concept by Chief Minister Mamata Banerjee will be in your must to do list.