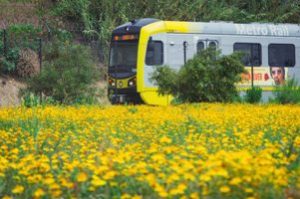 Emissions from cars surpass all other single sources of greenhouse gases in California, including the freight and shipping industry, oil and gas production, and all the state’s commercial and residential real estate combined.

On Monday, Southern California transit agencies are celebrating Earth Day by urging commuters to leave their cars at home and ride the bus, the train or a bicycle for free in order to help the environment.

The fare gates at Metro’s 93 rail stations will be unlocked to allow passengers to board without swiping a fare card. Bus drivers will not be checking for fares, as per officials. Southern California’s commuter rail system, Metrolink, will also be free Monday.

LADOT general manager Seleta Reynolds said that small changes like walking, biking, and taking transit every once in a while make a big difference for our future.

As per Metrolink, if 1,000 commuters on Monday took the train instead of driving, they would reduce greenhouse gas emissions by more than 23,000 pounds. This is equivalent of the carbon removed by a forest the size of 10 football fields.