Eurostat:Greeks spend an average of 9.9 days on a trip 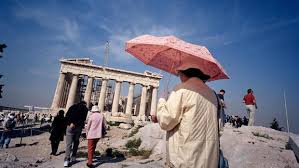 According to a new analysis Greeks are known to enjoy the longest holidays of of any European Union citizens.

There were wide disparities in the travel habits of the EU nationals as shown by Eurostat’s survey of 1.3 billion leisure and business trips.

An average of 9.9 days on a trip is spent by the citizens of Greece which is almost double the EU-wide mean of 5.1 days.

Luxembourg was the only other nation staying away for over a week, at 7.1 days.

The shortest trips were made by the Estonians and Latvians averaging just 3.3 days which is  exactly one-third of the typical Greek holiday. Finland was the next briefest across the Baltic, at 3.4 days.

For an average of 5.5 days the British travellers are away but the Irish were lower at 4.6 .

It was revealed by the statistical office of the European Union that  half of all trips involved at least one overnight stay were for holidays and leisure, one-third for visits to relatives and friends and one in eight for business.Spain was at 9.4 per cent showed single figures for overseas trips.

The trips taken aboard across the Europe-wide average was 26.7 per cent the UK was well above at almost one in three with 32.8 per cent.

There is a higher propensity for foreign holidays by citizens of smaller countries with a land border and it was found that four out of five trips by Belgians were made outside the country.

For Slovenia the figure is almost two out of three, for Austria a half but Luxembourg is far more extreme, and appears to have almost no domestic travel industry to speak of.

Around 1.7 per cent of citizens take a trip involving an overnight stay in the Grand Duchy.

The highest proportion of trips of any nation  is taken by the people of Luxembourg in Continental Europe, at 42 per cent. They are overtaken by the islanders of Ireland (43 per cent), Cyprus (49 per cent) and Malta (63 per cent).

It was found that three out of 10 trips made by UK citizens involve flying.

The biggest proportion of journeys were made by car  having an average of 64 per cent. While Slovenians are most in love with their cars and  used for 85 per cent of trips.

In Portugal, Spain, Bulgaria, Hungary and the Czech Republic More than three-quarters of trips that begin involved a car.

Exactly half of the trips were taken by  car by the Britishers the countries who scored lower were Luxembourg, Cyprus and Ireland – all on 48 per cent and reflected the high proportion travelling by air. The French and the Germans were the most enthusiastic rail users.