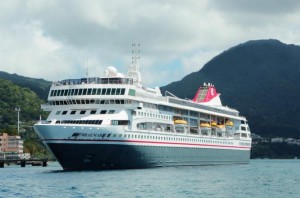 The use of plastic straws  has been banned by the Fred Olsen Cruise Lines and  it will  also remove plastic cutlery onboard its four ocean ships.Other waste-saving initiatives for its operations on Balmoral, Braemar, Boudicca and Black Watch will be implemented in the days to come.

Use of single-use coffee cups from its Bookmark Cafés will be removed and it will be replaced by plastic condiment tubs in restaurants, buffets, and room service orders. Plastic laundry bags will be swapped with linen ones.

The amount of cling film will also be reduced and ropes will be used to secure items during rough seas instead of plastic buildings.It was further considering measures that could be implemented to reduce and limit single-use plastics onboard its river ship, Brabant.

Thomas Rennesland, Fred Olsen’s hotel operations director, said that after listening to guest feedback and asking our staff how they could work together to reduce, and wherever possible, remove reliance upon single-use plastics.

He gave example of the Onboard Boudicca where they have been able to reduce the use of cling film by 32%.