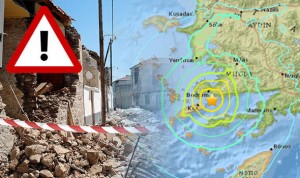 UK holiday hot spot in Greece was hit by a series of earthquake and warnings have been issued that more could be on the way.

Thessaloniki, Greece’s second-largest city was struck by magnitude 5.1 on the Richter scale at 6.24am.

The quake was also felt in nearby Macedonia but no damages or injuries have been reported.

Locals took to social media and described their  experience.

After a series of tremors from around midnight, that left buildings shaking, measuring 3.9, 3.5, 3.0 and 3.6 on the Richter Scale occurred, Greece was hit by 5.1 magnitude earthquake.

Kostas Papazachos, Professor of Seismology of the Aristotle University of Thessaloniki said that from his experience the earthquakes will not stop immediately. It is expected there will be an evolution of activity and one should be cautious.

He further said that they were dealing with East-West fault, fault that defines Mount Beles to the south, fissures that are triggered and give these little earthquakes.

He predicted the phenomenon  to continue for at least 1-2 days as the seismic history of the area reveals that the concerned area that gives such earthquakes, such sequences.