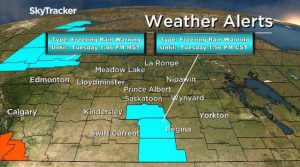 Travel advisories for several parts of Saskatchewan have been issued due to swirling, drifting and loose snow and ice.

Loose, swirling and drifting snow is reported in Regina and Saskatoon, and Saskatoon residents are also being warned of icy sections of road, packed snow and pavement frost.

Motorist should be on alert as conditions can change rapidly. Five to 10 centimeters of snow will be possible over the northern grainbelt by late Wednesday.

Travel is also not recommended between Moose Jaw and Swift Current and in the North Battleford and Meadow Lake areas.

A winter weather system across southern Saskatchewan will bring a ’wintery mix of weather’ to the majority of the southern half of the province.

Freezing rain could turn into snow on Tuesday afternoon as it encounters colder air over eastern Saskatchewan.

Five to 10 centimetres of new snow is expected over the northern grainbelt and eastern portions of the province by Wednesday evening.