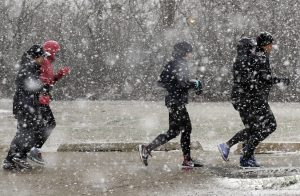 Chicago once again witnesses accumulating amounts of snow late in the spring season after the year 1989. The late-season snowfall brought as much as 6 inches of snow in parts of northern Illinois and about 2.5 inches in Chicago. This late spring snow record comes close to 112-year old record of 3.1 inches of snowfall on May 3, 1907.

O’Hare International Airport, received 2.5 inches of snow on Saturday. The official site at the Rockford airport reported 3.7 inches of snow. On Sunday, Chicago’s O’Hare Airport was blanketed by 5.3 inches of snow.

St. Charles in Kane County had the most recorded snowfall in the region, with 6 inches, according to data released by the National Weather Service. Another weather spotter at a different location in the same town recorded 5 inches, demonstrating just how much the intensity of the storm varied based on location.