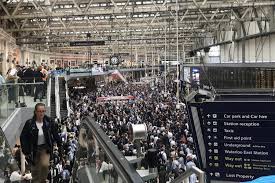 To mark the biggest increase in rail fares in five years a wave of protests had been planned on Tuesday.

The fares will rise by an average of 3.4%, with season tickets going up by 3.6% mentioned the union, it will outstrip average pay rises of last year by 50%.

The unions have planned protests at more than 40 railway stations in response to the increases.

However, the industry and government have defended the fare rises as they found it essential for investing in the modernisation of the railways.

Commuters on average earnings would spend between 10% and 20% of their take-home pay on train travel mentioned the RMT union.

After the public sector pay freeze started in 2011 the fares have increased by 24.5% . In the same period  the pay of 5 million workers including NHS staff and teachers has gone up by just over 5%.

The RMT general secretary, Mick Cash, said that the workers are struggling but private train companies are raking it in.

While entering the 25th anniversary of railway privatisation legislation, the need for public ownership of rail has never been more popular.

Mick Whelan, general secretary of Aslef, the train drivers’ union, said that after years of austerity  workers have not achieved pay increases at or around inflation.

It was unfair that the industry they subsidise creates transport poverty and hurts the communities and industries.

Stephen Joseph, chief executive of the Campaign for Better Transport commented that the government has protected motorists from increases in costs by freezing fuel duty, but allowed rail fares to go up, now being the  highest rise in five years.

Rail commuters are often concentrated in marginal constituencies so the government could end paying for this through the ballot box.

After a week of disruption to rail services owing to engineering work and strikes resulted in fare hike.

There were 24 hour strike staged by members of RMT on South Western Railway and CrossCountry on New Year’s Eve on separate disputes.