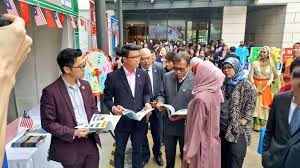 The China International Travel Mart (CITM) which is the Asia’s largest travel fair, opened on Friday in Shanghai. It featured a record number of foreign exhibitors. Participants from 107 countries and regions attended the CITM.

As per the organizer, nearly a third of the booths are occupied by foreign exhibitors. Analysts believe that the 2018 CITM will enhance cultural and tourism cooperation with foreign countries.

Alberto D’Albora, an Italian exhibitor at the CITM said that every year we are seeing new countries and content, as well as meeting new friends at the fair.

The fair has an exhibition area of 57,500 square meters housing a total of 2,245 booths. Of the 2,245 display booths, 69 per cent represent domestic exhibitors and 31 per cent those from overseas.

According to the Ministry of Culture and Tourism, in the first half of 2018, the number of outbound Chinese tourists reached 71.31 million, a 15 per cent increase year on year.

According to the China Tourism Academy, in 2017, tourism has contributed around 9.13 trillion yuan (around 1.3 trillion U.S. dollars) to China’s GDP, accounting for about 11 percent.

China held first import expo in Shanghai on Nov. 5-10, where pledges were made to keep opening up the country’s service sector.

The event is co-hosted by the Ministry of Culture and Tourism, Civil Aviation Administration of China and Shanghai municipal government.

Display booths from China include all-in-one tourism, red tourism and specialties from different destinations. The event is interspersed with performances – dancing, singing and intangible cultural heritage performances, as well as interactive games for buyers and audience members to win prizes.