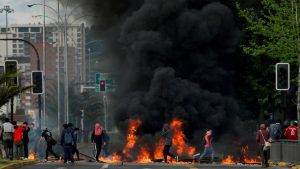 A state of emergency was declared in Chile after violent protests broke out across the country, leading to the cancellations of hundreds of flights.

The Foreign Commonwealth Office (FCO) advised the state of emergency originally applying only to Santiago after the civil unrest around metro stations and is expected to last 15 days.

After a 4 percent hike in public transport fares was announced the demonstrations first began on Monday.

The state of emergency was expanded to include Valparasio, Concepcion , La Serena, Coquinmbi and Rancagua after protests in Valparaiso, Viña del Mar, Temuco, La Serena, Punta Arenas, Antofagasta, and Concepcion.

So far in the protests eight people have been killed and there is a heavy military presence in these cities during this time.

From Monday evening till 6 am on Tuesday 22 October in Valparaiso, ,Concepcion, Santiago, Rancagua, Antofagasta, La Serena, Coquimbo and Valdivia a curfew was put in place.

The FCO said that there have been reports of domestic and international flights being delayed or cancelled. You should contact your airline prior to travel.

Travelling from Santiago airport during curfew will require a boarding pass which will ensure safe passage to the airport.

The Airline crews should need to show their official credentials to be able to travel to and from the airport during the curfew.

This weekend there were mass flight cancellations to and from the Santiago airport. Almost 100 inbound services were cancelled throughout the day on Monday 21 October.

Latam Airlines, is allowing passengers who are booked on flights from 20-24 October change their travel dates, free of charge, or cancel altogether for a full refund.
Vuela JetSmart would allow customers who booked to fly today to reschedule their flights at no extra cost for any time in the next 30 days.

Till now, 64 flights into Santiago have been cancelled.Santiago Airport has been active on social media and has kept passengers updated on Twitter.

It stated that the number of passengers spending the night in terminal has decreased.