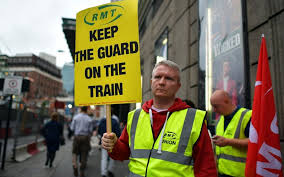 In a dispute over the role of guards, the members working for the train operator mainly covering south London, Surrey and Sussex  are on strike for the 40th day.

This is Britain’s longest running industrial dispute between the RMT union and the Southern Rail.Mick Cash, the general secretary stated that the members stand solid and united again to fight for passenger’s safety and access.

The existing dispute over the driver only operation has spread out and they believe that the travelling public paying a fortune gets siphoned off in private profits. He expects the money to be invested in a properly and safely staffed railway.

Most trains are running normally and the union claims that members are solid and united in the dispute over the driver-only operation.

On the Gatwick Express and Thamelink services the driver-only trains are running as normal, the Southern Rail is a part of Govia Thameslink Rail(GTR) franchise.

Cash stated that regular reports were received of trains running without a guard or OBS [on-board supervisor] on board on Southern Rail and disabled passengers were denied support and access.

Southern Rail’s scandalous situation cannot be continued and the GTR should start working with the union.

The RMT will have no impact on the vast majority of passengers a GTR statement read.

This pointless dispute should come to an end, and RMT should face the reality that the changes they were objecting to were successful a year ago.