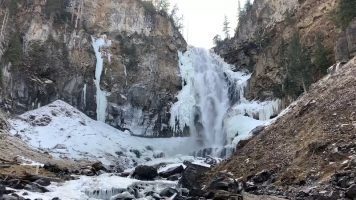 The waterfall in Yellowstone National Park has frozen as the temperature has plummeted to 17-degree Celsius.

The National Weather Service has issued winter storm warnings and advisories that came into effect for Wyoming on Monday as temperatures plummeted across the state.

Snow is supposed to spread across the state, with the heaviest amounts expected in southern Wyoming. One can expect dangerous winter weather in the region as people are prepared to travel for Thanksgiving.

While one storm is heading towards South Dakota, Iowa, Michigan, Minnesota and Wisconsin and another in the Pacific Ocean, which is expected to move toward California, Oregon and Nevada.

Denver International Airport was covered with around 7 inches (18 centimetres) of snow on Tuesday morning. Windy conditions reduced visibility and prompted the cancellations of around 30 per cent of the airport’s average daily 1,600 flights.

Around 1,100 people spent the night at the airport, including cadets from the Air Force Academy near Colorado Springs.

Long stretches of Interstates 70 and 76 were closed due to heavy snow in northern Colorado. Parts of Interstate 80 in Wyoming were also covered with snowdrifts of up to 4 feet (121 centimetres).

Many government offices in the Denver and Cheyenne, Wyoming were closed along with colleges and schools due to the extreme weather conditions.

The winter storm warning issued by the National Weather Service office in Las Vegas will remain in effect from 5 p.m. Tuesday through 4 a.m. Friday.

The warnings come at a time when Denver and other cities are already coping with heavy snowfall from a winter storm that is hitting the southern and central Plains region.