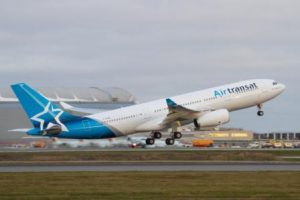 Canada’s Air Transat recently declared that it is suspending all services to most of its destinations until the end of April. The decision has been taken due to the deadly coronavirus outbreak all across the world which is adversely affecting global travel as well as the airline industry in almost every country.

On Wednesday, Air Transat said in a statement that all flights from the carrier will be suspended until April 30th 2020 following the Canadian government’s decision to close the country’s borders to all foreign nationals. It also mentioned that similar decisions have been undertaken by several countries where the airline operates leading to the gradual suspension.

Air Transat previously reported that earnings of its first-quarter were on a higher side and said that it was exploring its options to deal with the coronavirus crisis. The carrier mentioned that it was reducing costs and suspending discretionary spending. It also launched a voluntary reduced-time program for its staffs. However, the airline suddenly saw a sharp drop in its bookings since late February, similar to that of other airlines. Therefore, the carrier decided to cut down its operations.

Departure sales of the airline are also suspended with immediate effect until April 30. The suspension is being executed to and from most destinations in Europe and the United States. However, the Montreal-based carrier will continue functioning for a few more days despite sales being suspended so that Canadians can return to their homeland. The airline is also working on a repatriation plan for guests who are stranded overseas. Sales in both directions between Montreal, Paris and Lisbon as well as Toronto, London and Lisbon will remain open temporarily to enable all possible repatriations.

Air Transit is also advising Canadian customers who were ready to depart from Canada in forthcoming days to postpone or reschedule their departures.