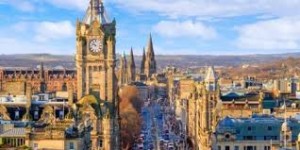 Edinburgh has won a sought-after conference of tourism leaders to Scotland. The city’s marketing body said that this win is due to the capital’s status as a world-class destination.

The European Cities Marketing (ECM) Spring Meeting is to be held in Scotland in February next year, with around 175 senior members of the tourism industry taking part in the event.
Marketing Edinburgh, which promotes the city across the world, said that it is celebrating the landmark announcement. ECM, an association for tourism organizations, aims to improve the competitiveness and performance of leading European cities.

The spring 2019 event will see industry leaders from across the continent assembling for critical thinking and discuss topical tourism issues related to Edinburgh, such as destination management and future travel trends.

Marketing Edinburgh said that the city is constantly ramping up its offering, with developments across the city including the complete overhaul of the St. James Quarter and a new £200 million development near Haymarket.

John Donnelly, the CEO of Marketing Edinburgh, said: “The annual European Cities Marketing Spring Meeting is a huge opportunity for host destinations to showcase their city to key industry players so we’re thrilled to be welcoming the meeting to Edinburgh for 2019.”