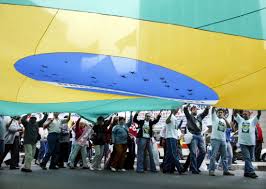 Tourism sector’s major transformative national fairs in Brazil have shown improvements and moved the tourism market and the host city.

Big events which take place annually in various states of the country, have increasingly valued tourism and stimulated the growth of areas engaged in the pursuit of new business opportunities.

Amid so many benefits that involve realizing them, the growing number of participants is a factor that also draws attention.

Some of these fairs attract more than 30,000 participants, impact millions of reais and point to the trend of optimism in the sector.

Brazil Minister of Tourism, Marcelo Álvaro Antônio, highlights that this type of event enshrines a rich exchange of experiences with key agents for tourism.

“It is an important space to plan actions that will transform the potential of Brazilian tourism into reality, directly benefiting our population with more opportunities, employment, income and social inclusion,” says the minister.

Considered the most effective tourism business fair in Latin America, Festuris, in Gramado (RS), celebrated its 30th anniversary in 2018 and, in addition to marking the local history, also registered 15,000 participants in four days of events – a growth of 66.6% compared to the previous edition. The number of attendees had an economic impact of R $ 17 million in the city and the Hydrangeas Region, which was increased in the local economy through expenses with lodging in the hotel chain, restaurants and commerce in general.

“We are proud of the legacy we have left for our city, our state and Brazilian tourism. We know what the industry can do for its destination and its population and Gramado is an example of this for Brazil. Therefore, we believe that tourism has the necessary strength to lead this new growth cycle of the country,” said Marta Rossi, director of the event.

The 2019 edition will take place between November 7th and 10th, at Serra Park.

“Their confirmation gives us a very positive indication of the projections for 2020 and confirms the success of the area dedicated to these players that has been growing annually,” says Luciana Leite, WTM Latin America Director.

In September 2019, the state capital also hosted the 47th edition of Abav Expo. Known as the largest national fair in the industry, on the 25th to 27th of the month, it received an impressive 32 thousand participants at Expo Center Norte – 39.1% more than the 23 thousand of the previous year.

“I am very proud to be a travel agent and to be part of a segment such as tourism that generates 319 million jobs and $ 8.8 trillion for the world economy,” said Magda Nassar, president of Abav Nacional.