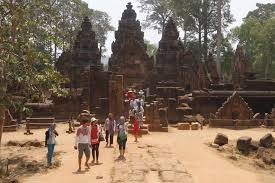 Mario Hardy, the CEO of the Pacific Asia Travel Association, argued that it was not so much over-tourism in majority of cases but poor tourism management that was creating problems.

In an interview at the 2018 Travel Mart in Langkawi, Malaysia, Hardy said the problem mostly is “poor management of tourism product offerings.” He prefers to identify the issue as “the disproportionate growth of tourism,” or the challenge of tourism dispersal.
These don’t exactly roll off the tongue.

To the communities being overrun with hordes of often-unruly vacationers, beer cans or selfie sticks in hand, the various labels, including overtourism or “the disproportionate growth of tourism” may be a distinction without much of a difference.

Either way, communities and countries need to grab hold of their tourism and quality of life destinies.

Hardy said destinations need to push tourists beyond the bucket-list spots, and use everything from local artists and technology to transform and revitalize neighborhoods and attractions. And push tourists to less-visited locales.

He pointed out Thailand as an example, which is marketing 24 gems beyond the usual destinations, and has experienced tourism growth at these attractions. Hardy added that Indonesia has thousands of beautiful islands despite the fact that “most people only know Bali.”

On a personal note, Hardy said the over-tourism problem — well, the tourism dispersal issue, that is — hit home when family members visited him in Thailand in 2014, and asked that he take them to Cambodia’s Angkor Wat. He took them to the renowned temple, which attracted some 2.5 million visitors in 2017, according to ticket seller Angkor Enterprise, and then later Hardy led his family to another UNESCO World Heritage site, a couple of hours away, where there were only about six tourists at the time.

Hardy said the monks at the nearby site — he was most likely referring to Sambor Prei Kuk in Kampung Thom province — told him they hadn’t seen any foreign tourists for months.
Turning to other important regional — and international issues — Hardy said he would be against a boycott of Myanmar despite the government’s genocide against the Rohingyas.
“I think what’s happening in Myanmar is terrible,” Hardy said. “The world is watching and nobody is doing anything, which is really a concern for all of us. But as mainly a trade organization, our involvement or influence in that area is kind of limited.”

Hardy said he opposes travel boycotts in general as being harmful to locals.

Hardy said heads of states in the region, as well as the United Nations, need to get together and put more pressure on the Myanmar government.

On other pressing issues in Asia-Pacific, Hardy said the Pacific Asia Travel Association will be working the International Air Transport Association to stem the rise in sex-trafficking, and will be undertaking initiatives to curb food waste at hotels and convention centres, and the adverse environmental impact of plastics.

With 1.8 billion international tourists expected to cross national borders by 2030, according to the United Nations World Tourism Organization, over-tourism solutions will clearly have to be addressed at a more rigorous level than is the current norm.

In 2015 and 2016, the Pacific Asia Travel Association teamed with TripAdvisor to give awards to destinations that have compelling stories to tell about their unique tourism qualities. Each destination received what was valued at $500,000 in the form of a TripAdvisor-assisted digital marketing campaign.