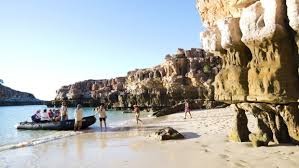 Development of a World Heritage coast extending from Shark Bay via the Kimberley would provide a huge opportunity for cruise ship tourism, as per an important West Australian tourism academic.

The idea was floated by former WA Premier Colin Barnett at the time of last year’s election campaign to visit Murujuga National Park and portion of the Kimberley coast join Shark Bay, Ningaloo and Cape Range on the UNESCO World Heritage list.

Edith Cowan University School of Business and Law tourism founding Professor Ross Dowling stated that expedition cruise ships would be elated at the opportunity to visit a World Heritage coastline.

“The moment the Burrup becomes a World Heritage region you will automatically have terrestrial tourists come, but I also know from the big cruise corporations they are looking for new sites on the west coast to visit,” he said.

“What cruise lines and the passengers are looking for is new and remote areas, places they have never been to.

“We just need to open this up, not to mass cruise tourism, but to small-scale, high-yield cruise expedition ships.”

“What comes with that is jobs and a stimulation of the economy,” he said.

“Deepwater ports are expensive, so I definitely would be of the opinion that enable ships that have the ability of access would be of big benefit to the region.”