Yellow warnings issued in Britain, travel chaos due to rains 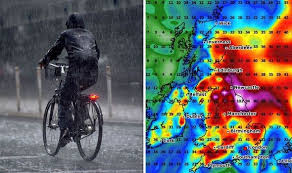 Autumn has already set into the northwestern parts of the country and Met Office has issued yellow weather warning for travel chaos as Britain will be facing gale force winds and showers.

The meteorological summer ends on Saturday and wet and windy condition will start there will be showers to follow for the second half of the weekend. Heavy winds will continue into Saturday morning across western parts of Scotland and England as well as Wales.

There will be strong gales around the exposed Irish sea  and coastal areas accompanied with showers. The rain will further move slowly eastward and is expected to be cleared around lunchtime in Wales and southwest England.

There will be blustery wind and weather will turn cool as the rain clears, it is predicted ahead of the front, east Anglia and the southeast will see temperatures up into the mid-20s again. There will be a contrast in Southeast England and east Anglia as compared to the northwestern part of the country.

There will be clear skies for many as the cold from will move away from UK.

The wet weather will be sweeping through the north of Scotland by heavy force winds. The weather will be separating summer from autumn. There will be a different feel on Sunday when one will step out of the door mainly across central and eastern Britain.

Sunny spells predicted with few mist patches for southeastern area along with fresh feel in the air. However the sunshine will be replaced by shower clouds.