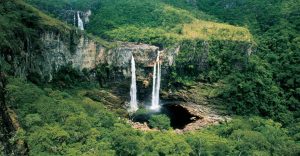 A fire is spreading through the national park of Brazil- Chapada dos Veadeiros- which has largest concentration of quartz crystals in the world.

The fire has destroyed a part of the conservation unit located in the northeast of the states of Goias. A statement published by volunteers on the social media- Rede Contra O Fogo (Fire Fighting Network)-says that the fire has affected around 3,000 hectares within the park.

The park is located in the Chapada dos Veadeiros, an ancient plateau with an estimated age of 1.8 billion years. The national park is spread over an area of 655 square kilometres in the municipalities of Alto Paraiso de Goias, Cavalcante and Colinas do Sul. The Chico Mendes Institute for Biodiversity Conservation looks after the maintenance work of the park. The park has varied geography that ranges from dense grassland to close woodland.

However, this is not the first time that the park had been ravaged by fire. Earlier, hundreds of firefighters had to battle a blaze in the park in 2017. The fire had charred around 35,000 hectares of the park within six days. NASA’s satellite had detected fires in the park on October 17, 2017.

Around 60,000 people visit the park on an annual basis. The park had grown bigger into size in 2017 as the government took initiative regarding this. The park’s size increased from 65,000 to 240,000 hectares. Many environmentalists had welcomed the initiative of the government.